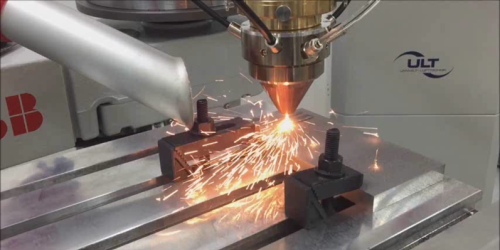 RUAG Australia is working together with leading Australian researchers to investigate the use of laser metal deposition (LMD) production technology for faster and more cost-effective aircraft repairs. The collaborative...

Laser metal deposition (LMD) is an additive manufacturing process akin to 3D production technology. Metal powder is fed into a laser beam which is scanned across a surface to deposit the powder material in a precise, web-like formation. “LMD is basically a very high-tech welding process where we make or rebuild metal parts layer by layer,” explains Professor Milan Brandt, RMIT, the research team lead. The bond created by LMD is exceptionally strong making the process a viable method for both manufacturing spare parts and repairing existing parts, where the repaired part is just as strong as, or in some cases even stronger than, the original. Professor Brandt confirms the concept is proven and that prospects for its successful development are positive.

The research team sees the technology being applied to existing military aircraft platforms as well as the newer systems, such as the F-35 fleet. Considering the estimated total cost of replacing damaged aircraft parts for the Australian Air Force alone is currently at more than $230 million a year, the move to locally, additively manufactured components would have a significant impact. The team is evaluating expectations that LMD technology will effect real cost savings in the areas of maintenance and spare parts purchasing, scrap metal management, and warehousing and shipping costs.

“Strategically speaking, a shift to LMD technology means less downtime for repairs and a dramatic increase in the availability and readiness of aircraft,” states Neil Matthews, Senior Manager of Advanced Technology and Engineering Solutions, RUAG Australia. He is convinced that the technology has the potential to transform the concept of warehousing and transporting for the defence industry. Implementing LMD technology means that parts could be built or repaired on site. “Instead of waiting for spare parts to arrive from a warehouse, an effective solution will now be available locally,” he comments.

“This technology could be applied in any industry where metal degradation or remanufacture of parts is an issue. The current project focuses on military aircraft and it is potentially transferable to the civil aircraft, marine, rail, mining, and oil & gas industries,” states David Chuter, CEO and Managing Director, IMCRC. “Australian industry stands to benefit significantly from this project,” he continues.

The two-year project is the latest in a series of collaborations between RUAG Australia and RMIT.

RUAG Australia is a major industry research centre for the development and application of powder deposition technologies focusing on both SPD, sometimes referred to as cold spray, and laser assisted deposition (LAD), for defence applications. These technologies find cost-effective application in the areas of geometry restoration and corrosion protection, in particular. Further, these technologies enable the restoration of corroded / damaged metallic components / structures to acceptable levels of structural integrity and functionality. RUAG Australia maintains and operates a fixed and mobile SPD capability, as well as a fixed LAD capability, and is a DASA 145, EASA 145, CASA 145 approved organisation.