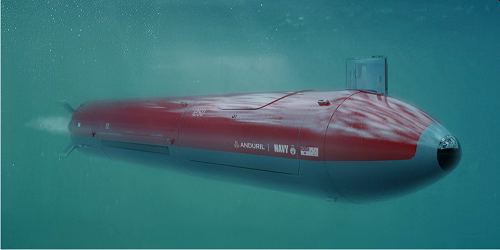 First of three 30 metre-long underwater drones capable of carrying weapons and diving up to 6,000 metres will be ready in a year.

Three robotic submarines will be built at an undisclosed site on the shores of Sydney harbour within three years to help “mitigate” a looming capability gap, military technology company Anduril’s Palmer Luckey has said during a visit to Australia.

The Anduril founder said the first 30 metre-long underwater drone would be ready within a year and would act as a deterrent to Chinese aggression.

In May, the then defence minister Peter Dutton announced the defence department would co-fund a program to build “cutting-edge uncrewed robotic vessels”.

The extra large autonomous undersea vehicles (XLAUVs) will be used for intelligence gathering, reconnaissance and surveillance, and will be capable of carrying payloads including weapons, sensors and scanners, and of diving up to 6,000 metres.

Luckey, a tech entrepreneur, is better known as the creator of Oculus Rift, the virtual reality headset he sold to Facebook in 2014. Now he has moved to defence technology and is in Australia meeting defence officials and recruiting staff for this venture.

Anduril is hoping to increase its current 40-strong workforce to hundreds of staff quickly. The Australian arm of the company has a research and development facility next to Sydney harbour, where it will be able to test the drones in the water.

The defence minister, Richard Marles, among many others, has warned that there will be a gap between phasing out Australia’s ageing Collins class fleet and the acquisition of the new nuclear-powered fleet of submarines.

Luckey said Anduril decides what to build “in response to the global situation” and that it would build the three boats in less time than the three years stipulated in the contract.

“We’ll build the first one in a year, the next one as quickly as we can after that,” he said.

“Undersea vehicles will be a really important part of deterring aggression.”

Asked about the ability for the drones to plug the capability gap, he said: “That’s one of the reasons we’re pulling the timing in. When you’re talking about a gap, we can help mitigate the problem but we’re not going to fix the problem.”

Crewed submarines would always be needed, he said, to move special forces troops, to carry loads over a certain size, and to make decisions in a military context.

Anduril promises the drones will be stealthy and able to travel long distances without surfacing. They will also be able to be launched from, and return to, vessels and ports.

“All three are to drive the innovation required to get to a deployable and manufacturable capability in the shortest possible time,” he said.

“It’s a co-development partnership which means it is always getting better and better.”

A spokesperson for Marles said work was under way to deal with the capability gap.

“As the deputy prime minister has said, there is a process being undertaken right now of evaluating the options for what will be the solutions for submarines under the framework of Aukus which will deliver the next generation of nuclear-powered submarines for the country,” the spokesperson said.

“In doing that, [the process] is also looking at how quickly that can be delivered, what capability gap arises, and from there, the range of options in terms of dealing with that capability gap.”