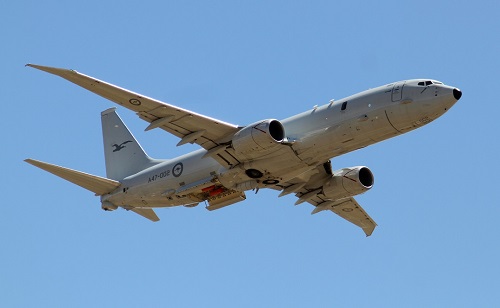 Australia’s newest maritime surveillance aircraft, the P-8A Poseidon, has been welcomed into the Royal Australian Air Force (RAAF) at a ceremony in Seattle, USA.

Minister for Defence, Senator the Hon Linda Reynolds CSC said it marked another milestone in this important project to enhance Australia’s maritime security.

“The P-8A Poseidon aircraft is a cutting edge aircraft that will conduct tasks including anti-submarine warfare, maritime and overland intelligence, surveillance and reconnaissance, and support to search and rescue missions,” Minister Reynolds said.

“The arrival of the latest aircraft provides the Government with enhanced flexibility to support multiple operations and will play an important role in maintaining border security.”

“The Morrison Government is committed to creating jobs in our defence industry, and this project is directly creating 120 jobs in South Australia,” Minister Price said.

“Already, more than 4,000 Aussies have contributed to the broader infrastructure build at RAAF Base Edinburgh where the aircraft will be located. Australian small businesses will have opportunities to get involved in sustaining these aircraft.”

The aircraft is now undergoing its verification and validation flying in the United States, and will join the rest of the fleet in Australia, based at RAAF Base Edinburgh in South Australia

Ten of the twelve aircraft are already operating in Edinburgh, with the remaining two aircraft expected to be in Australia by January 2020.