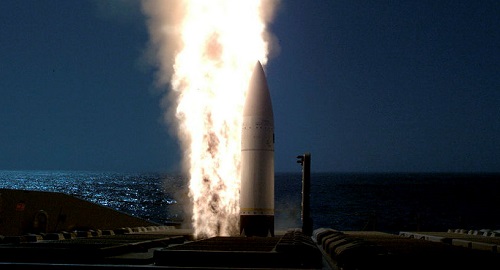 JASSM-ERs which have a 900km range will be deployed on FA-18s and F-35 fighter jets while Hobart class destroyers and Anzac class frigates receive NSMs.

Both AMC, a subsidiary of Australian-owned munitions manufacturer NIOA, and SMA which is backed by indigenous companies Electro Optic Systems and Nova Systems, will now ‘support’ the foreign defence prime contractors.

Both had previously seen themselves as heading up the GWEO with support from multi-national suppliers.

“A truly sovereign Australian enterprise has:

Minister Dutton said today : “We will be working with them to rapidly increase our ability to maintain and manufacture guided weapons and their components in Australia.

“We know we need to work closely with our partners to bolster our self-reliance and this is another major step in delivering that sovereign capability here in Australia.”

But clearly what has been announced is not sovereign by Jim McDowell, former head of BAE Systems Australia and Nova Systems definition.

However today the Australian Missile Corporation welcomed its appointment to the Enterprise Partner Panel for the nation’s new guided weapons enterprise.

Nioa CEO Robert Nioa said: “This is the beginning of an exciting opportunity to pioneer a high-tech defence manufacturing sector that will create jobs, drive innovation and build critical sovereign capability.

“The AMC is looking forward to working with our industry partners, combining our extensive capabilities and experience to deliver the best of breed technology to the ADF.”

Nova systems issued a similar statement, though it did not actually welcome the decision.

CEO Jim Mcdowell said: “The expertise the SMA brings to the GWEO Enterprise will lead to greater self-reliance for a range of hi-tech guided weapons.

“The Enterprise will bring operational sovereignty to Australia, which in the case of guided
weapons, is about removing the risks of losing access to, or control over these essential
weapon systems.”