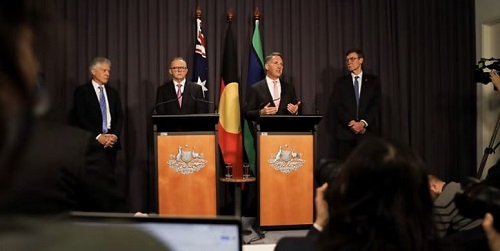 Defence projects have blown out by at least $6.5bn placing even greater pressure on the federal budget, the government will reveal on Monday.

The new figure – which comes before the promised nuclear-powered submarines have even been factored into the budget – has led the government to commit to “prudent” future management of defence projects.

Labor is not expected to spell out defence budget cuts on Monday, but it has not ruled out changes to projects within the portfolio – even though it has committed to the growth in overall defence spending laid down by the Coalition.

The government said 28 major projects were running behind schedule – or cumulatively 97 years late – including the Hunter Class frigates, offshore patrol vessels and the battlefield command system.

Additionally, 18 projects were running over budget with “at least $6.5bn of variations from the approved budgets identified”. This figure was based on a comparison with the amount set aside when the projects gained “second pass” approval from ministers.

Officials said a large share of the budget variations was due to factors such as exchange rates and price indexation, but these still had a real impact on the defence budget.

The government will argue the former government “failed to provide the leadership needed to effectively manage” risks, and will promise six new measures to manage projects of concern.

These new steps include creating an independent projects and portfolio management office within Defence, and regular ministerial summits to discuss remediation plans.

The defence minister, Richard Marles, said the Albanese government would be “better focused on the quality of the spend within defence to ensure we are providing our ADF personnel with the best capability”.

“We face the most challenging circumstances since the second world war, compounded by the fact that the economy is facing serious pressures – and reaching record spending within defence as a per cent of GDP means we need to be more responsible about the way in which we manage,” he said.

Taking aim at the former Coalition government’s handling of defence projects, Marles argued money was “flushed down the toilet”.

“It’s not as though we can go on to the battlefield and overwhelm our adversary by running up to them and waving a copy of the budget papers in their face,” he said.

Plans for at least eight nuclear-powered submarines under the Aukus agreement with the US and the UK are yet to be factored into the budget, because key details are part of a review due to be completed by March next year.