Australia to get nuclear-powered submarines under new AUKUS Alliance, will scrap $90B program to build French-designed subs 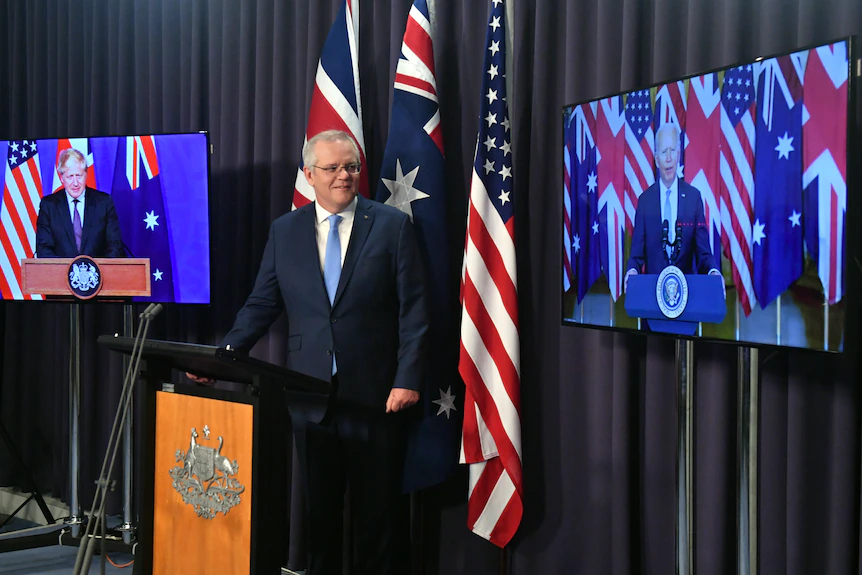 In one of what is probably the most significant national security decisions in decades, the Federal Government announced, last night, that they will acquire a fleet of nuclear-powered submarines, effectively scrapping the $90B submarine program with Naval Group.

The details of the plan to purchase the nuclear subs will be determined over the next 18 months The initiative is part of a new trilateral advanced defense agreement with the United States and the United Kingdom.

Australia's next submarine fleet will be nuclear-powered under an audacious plan that will see a controversial $90 billion program to build up to 12 French-designed submarines scrapped.

The ABC understands Australia will use American and British technology to configure its next submarine fleet in a bid to replace its existing Collins class subs with a boat more suitable to the deteriorating strategic environment.

Australia, the United States and Britain are expected to jointly announce a new trilateral security partnership on Thursday, with a focus on aligning technology and regional challenges.

But Australia's embrace of nuclear-powered submarines will have its political and technological challenges, given there is no domestic nuclear industry.

The new three-nation security pact – called AUKUS – will be seen by China as a bid to counter its regional influence, especially in the contested South China Sea.

The nuclear submarines would likely be based in WA.

In 2016, the Turnbull government announced French company Naval Group (then known as DCNS) had been selected for this country's largest-ever defence contract, to design and build "regionally superior" conventional submarines.

The ABC understands Prime Minister Scott Morrison convened a National Security Committee of Cabinet on Tuesday ahead of coordinated announcements in Washington and London.

Cabinet ministers were given special COVID exemptions to travel to Canberra for the top-secret discussions.

In a highly unusual step, the Prime Minister also invited Labor leader Anthony Albanese and three of his senior shadow ministers to be briefed on the plan.

A well-placed military source has told the ABC the Defence Department's general manager of submarines, Greg Sammut, has called an urgent "clear lower decks" meeting for tomorrow morning to discuss the dramatic development.

Another senior official said "top secret" briefings have been arranged at the Defence Department on Thursday.

Inside military circles there is also speculation that the transition to a new nuclear submarine program could initially be overseen by Retired US Vice Admiral William Hilarides, who chairs the federal government's Naval Shipbuilding Expert Advisory Panel.

Government sources say Mr Morrison tried unsuccessfully to line up a phone call with French President Emmanuel Macron on Wednesday, but it has now been instead scheduled for Thursday.

The ABC has been told that news of Australia's decision was instead delivered to Paris by the secretary of the Defence Department Greg Moriarty.

Allied naval presence is expected to increase north of Australia — including in the contested South China Sea — as part of a coordinated tri-continental push against Beijing territorial aggression.

Australia, the United States and Britain are expected to reorient their submarine and warship fleets to counter China's increasing regional presence.

Regional diplomatic missions across Canberra are expecting to be briefed on the announcement on Thursday afternoon.