Astute versus Virginia: which nuclear-powered sub is the best fit for Australia? 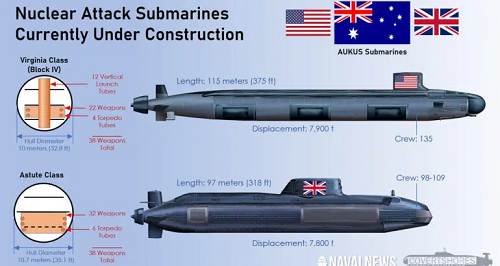 Picking the right design for the Royal Australian Navy’s nuclear-powered submarines is extraordinarily complex and difficult choices will need to be made. There are two contenders, the Royal Navy’s Astute-class submarine and the US Navy’s Virginia-class submarine, which refers to the ‘Block V’ variant of the boat.

Both designs are very good, and in some respects they’re equal. Both are fitted with reactors that never need refuelling, both feature advanced pump-jet propulsors, both support Tomahawk cruise missiles and both will require Australia to field a rigorous no-fail regulatory and safety regime.

There are also numerous issues that will need to be considered by government, including fleet size, submarine service life, Australian defence self-reliance and Australian industry content.

First, the design risk. The Virginia natively supports the RAN’s presumably preferred AN/BYG-1 combat system and Mk-48 torpedoes, whereas the Astute doesn’t. Modifying the Astute to accommodate the RAN’s preferences could upset the fine-tuned space, weight, buoyancy, balance, power and cooling attributes, potentially triggering a cascade of unintended issues. Modifying existing designs can cost hundreds of millions and take years: if it ain’t broke, don’t fix it. Alternatively, the RAN could accept the British combat system and Spearfish torpedoes.

Block V Virginias have a significantly larger payload than the Astutes with the bonus ability to ripple-fire dozens of Tomahawks and support likely future payloads. The British sub only supports torpedo-tube-launched weapons, with a magazine of 38 Spearfish torpedoes and Tomahawks. The Virginia Block V carries around 65 weapons: 25 torpedo-tube-launched weapons, plus 12 Tomahawks in two payload tubes forward of the sail and 28 Tomahawks in four wide-diameter payload tubes aft of the sail. The Virginia’s wide-diameter payload tubes can also support future payloads such as autonomous vehicles, AIM-9X surface-to-air missiles and hypersonic boost-glide missiles.

If the US agreed, an initial batch of Virginia Block Vs could be acquired off the shelf and brought into Australian service relatively quickly, to facilitate RAN nuclear-safety and crew training, command courses and nuclear qualifications. Concurrently, a full production run of eight boats could take place in South Australia. A 2018 ASPI report determined that a ‘critical mass’ of 10 Australian SSNs would be required to sustain sufficient certified personnel, at sea and ashore.

This plan would require USN support in terms of reactor supervision, at least in the early years, and the allocation of USN production slots to the RAN—but only if the US amended its priorities. The USN operates 19 Virginia-class boats with plans for 66. This concept could work with the Astute, but it would require the UK to keep building them beyond the planned seven boats and to delay production of its new Dreadnought-class submarines.

The Virginia class might be easier to sustain and operate, given the USN’s rapidly expanding fleet and its resupply interoperability. Research and development of leading-technology upgrades is always costly and justifying high R&D costs might be more difficult if there are fewer boats of a certain type. If we assume that Australia eventually acquires eight to 10 SSNs, that would mean a total fleet of 17 Astutes versus 76 Virginias. In fact, the USN is already planning for a stealthier Virginia Block VI.

Wartime resupply is another issue for consideration: picking the Virginia would allow RAN and USN submarines to be resupplied with ordnance in Australia, Japan, Guam, Hawaii and San Diego. However, the UK is also part of AUKUS, so holding a cache of Spearfish torpedoes at select RAN/USN facilities would be advantageous at any rate.

Choosing the Astute class could potentially shorten the time required to grow the pool of Australian commanding officers and executive officers. RN COs and XOs are seaman officers who have completed the requisite nuclear systems course and are supported by specialist RN nuclear reactor engineers who don’t go on to command submarines. By contrast, USN COs and XOs are all nuclear reactor engineers who have stood watch over a submarine reactor at some point in their careers. This difference is significant because it could take 15 years for an Australian nuclear engineer to gain sufficient at-sea experience to become an Australian SSN CO.

The export-control factor is where choosing the Virginia might run into serious problems. The US State Department’s International Traffic in Arms Regulations (ITAR) rigorously govern the transfer of all American military technology. Under ITAR, naturalised Australian citizens could be deemed dual nationals and might have difficulty in obtaining US government approval. A person who is a dual national from a proscribed country would likely be rejected outright.

Ignoring ITAR isn’t an option because penalties are severe and extraterritorial—for example, a US$1 million fine per breach and/or 10 years in jail and/or placement on US government denial lists. Ultimately, the ITAR dual-national restriction is problematic because Australia is a country of immigrants. By contrast, the UK government’s export controls might be more flexible concerning dual nationals and particularly naturalised Australian citizens.

Regardless of the viewing angle, picking the optimal nuclear-powered submarine for Australia is incredibly technical, complex and difficult. Even the most optimistic delivery timeline will take years, and it’s likely to be 15 years before qualified Australians are able to run the boats in a self-reliant manner. Getting this decision right will determine how difficult it is for Australia to operate, sustain and maintain its SSNs well beyond the 2060s.

Few government decisions have so many long-term implications with so little margin for error. This is one of them.